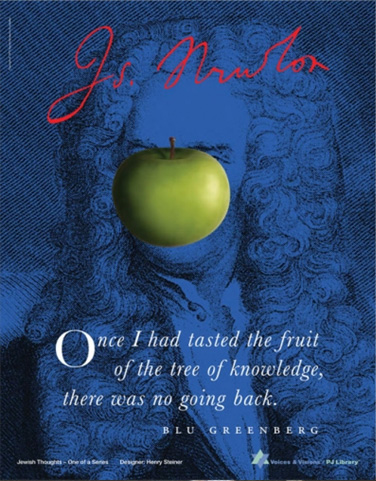 "Once I had tasted the fruit of the Tree of Knowledge, there was no going back."

As I began to panic over what I could possibly say about this poster, I took a deep breath and told myself to try focusing on the most prominent feature of the poster.  So, what’s the most prominent feature of this poster? - the beautiful green apple that stands in the forefront, glowing brightly, and leading our eyes to the very front of the poster.  What’s behind the apple? - a person with long flowing hair.  The signature above the person tells us that this person is Sir Isaac Newton.

So how does our quote relate to Newton?  According to this poster, the apple represents the fruit of the Tree of Knowledge.  The fruit that Newton sampled and tasted was the concept of gravity.  Once that apple hit Newton on the head, once Newton tasted and began to develop the concept of gravity, there was no turning back, both for Newton and the world.

The concept of gravity has changed the course of how we think, how we understand physics, how we travel and move through our lives.  From the apple, and Newton’s understanding of gravity, has sprung roller coasters, airplanes, space travel, etc.  Newton’s discovery, his taste of knowledge, occurred long ago, but the consequences of that discovery continue to affect us today, impacting our everyday lives, and leading us into a brighter future.

How does Newton’s apple and this quote relate to today’s Parsha - Parshat B'reishit?  This morning’s parsha is, of course, the source for the Tree of Knowledge.  The midrashim and mephorshim disagree about the appearance and nature of the fruit that grew on the Tree of Knowledge.  Some say the fruit was an etrog, others claim it was a fig; still others insist that the fruit was grapes.  Whatever the fruit of the Tree of Knowledge looked like, it was indeed a game changer.  Once Adam and Eve had eaten from it things changed dramatically.  The fruit caused Adam and Eve to be exiled from the Garden of Eden.  Angels were placed as guards at the entrance to the Garden and there was, as our quote says, literally “no way of going back.”

What else besides a change of location happened with the eating of the fruit of the Tree of Knowledge?  What other changes occurred?

1.  Death and suffering were introduced to the world - No longer would an individual live forever.  No longer would people be able to simply pick and eat the fruit that G-d had planted for them.  Instead, man would need to cultivate the land themselves.  They would need to work by the sweat of their brow.  Women would experience pain during childbirth.  Interestingly, Rashi notes that the pain that women would experience would not just be isolated to the time of the physical birth of a child.  Noting the number of times that pain is referred to in the pasuk, Rashi notes that women will experience - tsa'ar gidool banim - pain or anguish caused by the rearing of children.  Anyone who has lived with a tantruming 2 year old or has attempted to cope with a temperamental adolescent can attest to the fact that rearing children involves emotional turmoil and pain.  The benefits and satisfaction of child rearing are well worth the effort, but it’s interesting to note that the fruit of knowledge both complicated and enriched the child rearing experience.

2.  Self-consciousness, self-awareness - were also introduced by the fruit of the Tree of Knowledge.  The text tells us that - ve ti pakachna eynai - the fruit opened their eyes.  Adam and Eve became aware of their nakedness and their vulnerability.  They became aware of the ways in which they differed from those around them.  Self-consciousness and self-awareness are, of course, important components of being human.  With self-consciousness, we are able to assess our own behavior and change our ways.  We are able to think about how we relate to others and how we can enhance our relationships.

3.  Free will - G-d directly acknowledges the change that the fruit of the Tree of Knowledge has wrought in man when He says - ha adam kachad me’emenu leda’at tov ve ra - man is become as one to us to know good and evil.  By eating the fruit man becomes aware of the fact that he has free will, the ability to act as he pleases - both in positive good ways and in bad ways.

4. Creativity - Aviva Zornberg points out one additional way in which the fruit changes humanity.  She notes that the fruit introduces man to the powers of creativity.   After Eve eats, G-d asks her – ma zot asit - What have you done?  Notice the word asit comes from the verb la-asot - to do or make.  Who else engages in la-asot?  G-d.  How do we know this?  Because on Shabbat G-d rests from mkol mlachto asher asah - all His work that he does.

So the fruit brings about both difficult change and good change- It gives people added responsibility.  It acknowledges that men and women have free will.  The fruit gives us ability to create, to care for the world, to nurture and watch over others, to push boundaries, to think creatively.  The fruit brings us all sorts of new powers.  And yet our banishment from the Garden of Eden reminds us that there is a limit to our new powers.  We cannot live forever.  We are not as powerful as G-d.  The lesson of the fruit seems to be that we must learn to use our new powers for good and not for evil.  The fruit, as the bright apple in our poster implies, brightens our potential and leads us into a whole new future.

Now let’s turn to the author of our quote - Blu Greenberg.  Like Newton, who discovered gravity, like Adam and Eve who developed self-awareness, creativity, and free will, Blu Greenberg tasted and sampled a fruit that changed her life forever.  For Blu, the fruit of knowledge was feminism.  When she encountered and tasted the idea of equality of gender, she discovered that, for her, there was no going back.

As she explains in the commentary that she has written to accompany this poster, Blu at first thought that the world of Orthodox Judaism and the world of feminism needed to remain separate and distinct from one another.  However, the more she studied, and the more she discussed the concepts of feminism with intellectuals, and rabbinic authorities, the more she realized that the concept of equality was rooted within the Jewish concept of tzedek - of justice.  Blu realized that there was no reason to bar equality of gender from Orthodoxy.  Blu wanted, and effectively pushed for, increased Torah learning experiences for women, increased and varied prayer experiences for women.  She wanted those women who so desired to be able to say Kaddish and participate more fully in the mourning process.  Thanks to Blu, there are a greater number of higher institutes of Jewish learning for women than ever before, and new practices for Jewish women continue to grow and develop.

Blu’s quote, and the images on this poster, implies that each of us, at one time or another, has encountered and tasted our own fruit of knowledge.  We’ve come across a person, a piece of writing, a concept, or an idea that alters the way we function in the world.  While I’ve sampled the fruit of knowledge many times in my life, I experienced two important tastes of this fruit, coincidently enough, on Simchat Torah.  One taste occurred when I, at age 14, discovered boys - more specifically when I discovered Mozie.  When I finally, on Simchat Torah mustered up the courage to speak with Mozie, the cute boy who stood in the corner of shul, and discovered his wit, intellect, and charms – and realized that there was one person out there who completely complimented my own strengths and weaknesses - there was no turning back.  After 30 years of marriage to Mozie, I can confidently state that meeting him has been the best fruit of knowledge that I have ever encountered.

Several years after my Simcaht Torah of “meeting Mozie”, I spent a Simchat Torah in Israel where I stumbled, by chance, upon a women’s Simchat Torah reading.  At that reading, I once again encountered a fruit of knowledge that would change my life forever.  Up until my experience with this women’s Torah reading group, I had always loved Simchat Torah, but I had always focused upon the simcha aspect of the holiday.  I loved dancing and, as a kid growing up in Kodimoh synagogue, tying men’s Tallisim together and singing at the top of my lungs  But I had never really focused on the Torah aspect of the holiday.  The women’s Torah reading opened my eyes to a whole other side of the holiday.

Since that reading I have started and become involved in many women’s tefillah groups.  Simchat Torah has become my favorite time of year.  I love preparing a Torah reading for Simchat Torah.  For many years, I have had the honor of reading what we, in our women’s groups, refer to as “Kallat Torah.”  I read the section that concludes the book of Devarim.  For me there’s no greater thrill than reaching that final lamed of the Torah, and seeing that clean stretch of blank claf that extends to the end of the Torah scroll.   Each time I prepare my reading, I see the text with new eyes - I discover a new word, phrase, or idea to focus upon.  Every year, I find myself feeling extremely grateful that I have been able to taste this fruit of knowledge that has so clearly enriched my life.

My hope is that we should all continue to discover and enjoy our own fruits of knowledge.  May we all continue to find ideas that challenge and enlighten us; that help us to grow, and that push us forward into the bright and glowing future depicted on our poster.