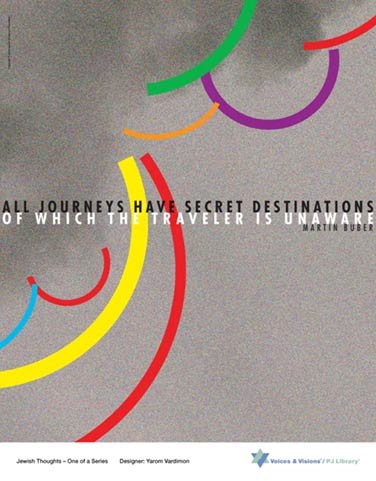 "I used the posters at three of our Machanot and would love to tell you how useful they have been. Not only was I able to use them extremely effectively in my educational programming, but the fact that they are so striking led young people  in the CIT (Counselor in Training) programs to ask me for copies to decorate their common space so that they could provide a backdrop to their training program.

A few examples of how I used them:

*I used them for a Shabbat morning Chug in which each participant individually chose a poster and then talked about why they liked them both visually and in terms of the quotes. I then used what they said to encourage them to talk about the important Jewish issues camp raised for them. The kids were ages 9-13.

*I gave out posters to a group of 14-year-olds and asked them in small groups of 2-3, chavruta style, to discuss the posters. Each small group learned as they were doing this about the traditional form of Jewish study in chavruta and then as a larger group (there were 15 kids) we deconstructed what they had learned. It was great!

*I took the Buber poster on its own with a group of CITs and got them to talk with me about how they are involved in the journeys of their campers once they become counselors. We looked very carefully at the quote and played with the impact small changes have on meaning and about nuance in education (for example, if the Buber quote had said "secret destination" instead of "secret destinations" what the impact would have been on the quote).

I hope to be able to integrate the posters into more Habonim Dror programs as I move into my new job as head of the world movement."

If you have organized a program using Voices & Visions™ materials, please share your results with us.
“Silence remains, inescapably, a form of speech.” - Susan Sontag
Submit