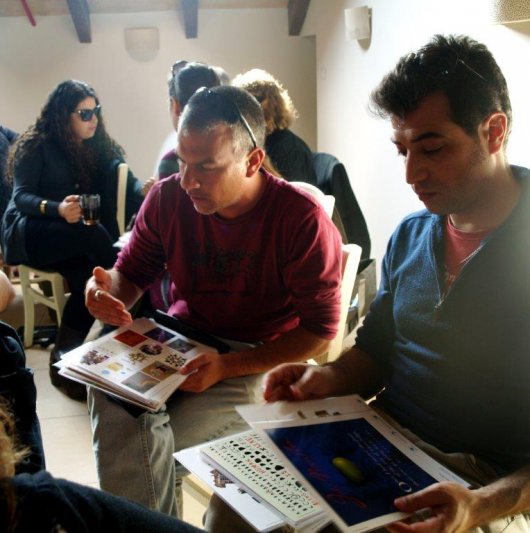 “Imagine a room full of the education directors for some 30 of Israel’s top tour operators and youth organizations ooing and aahing when they open cloth bags with the Voices & Visions and Harold Grinspoon Foundation logos. Imagine each sifting through his or her own set of laminated Masters Series posters. Imagine them brainstorming in small groups about how the posters can be used as conversation triggers – at the start of the day and at its end, during Shabbat, in the evening – with tens of thousands of Taglit-Birthright Israel participants.

‘These are beautiful,’ said Jodi Katz, Senior Educator for Israel Experts, during the brainstorming session that took place in Afula in the north of Israel.

‘What a great idea -- there are so many ways to use these!’ said Udi Krauss, Educational Coordinator for Israel Programs for Shorashim, a non-profit devoted to building bridges between Jews in Israel and around the world.

After months of work by Hedva Cohen, Harold Grinspoon Foundation coordinator for Voices & Visions in Israel, in close consultation with Taglit Education Director Zohar Shavit, HGF delivered 500 sets of posters, which the education directors will distribute to tour/education guides who staff the buses with Taglit participants. This means Voices & Visions posters will be enjoyed by tens of thousands of young adults this summer as part of the Taglit experience.

What did the education directors want to know?  ‘Would HGF consider translating the posters into Russian, Spanish and French for non-English speaking Taglit participants?’ ‘What about including some Hebrew/Israeli posters in the future?’

If you have organized a program using Voices & Visions™ materials, please share your results with us.
“Silence remains, inescapably, a form of speech.” - Susan Sontag
Submit