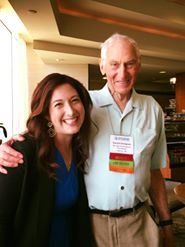 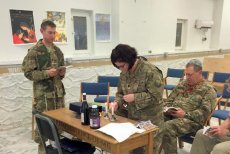 Voices & Visions posters were on display at a U.S. army base in Afghanistan to lend a "warm and welcoming" atmosphere to the Passover Seder. 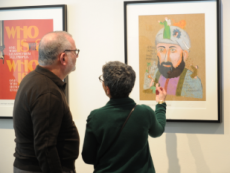 A Traveling Exhibition of the Voices & Visions Masters Series is framed and ready to exhibit (18 posters, 28" x 32")

The work was commissioned from master Jewish designers such as Seymour Chwast, R.O. Blechman, Carin Goldberg, Milton Glaser, and many more.  The Harold Grinspoon Foundation has made two framed sets available for loan for a few months at a time to Jewish museums and gallery spaces.

The cost is forwarding the exhibit to the next exhibitor or back to the Foundation.  Drafts of the artists' work are also available, but as yet unframed. 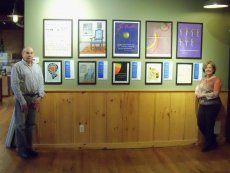 The Jewish Heritage Museum of Monmouth County, located in the historic Levi Solomon barn in Freehold NJ, hosts an exhibit of the 18 Masters Series posters.  Each poster is signed by the artist.

Voices & Visions presented at the "Creative Catalyst Symposium for Socially Engaged Art," held in New York City and organized by Art Kibbutz.  In the presentation attending artists, curators, and activists were encouraged to use Voices & Visions posters to promote social justice and environmental awareness.

The Voices & Visions exhibit at Elms College in Chicopee MA includes all 18 Masters Series posters with images from artists' creative process.  At the opening event Rachel Raz of Boston's Hebrew College discussed how she has integrated Voices & Visions art into interfaith trips in Israel. 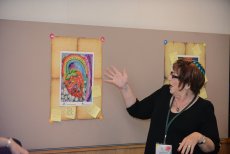 Voices & Visions' Proudly Jewish posters formed the opening activity in a NewCAJE Conference workshop led by Lisa Litman, Director of PJ Goes to School.  In the session participants were asked to attach thought-provoking comments or questions to a poster, and the group then discussed ways to use the posters in educational settings.

Find out more in The Exchange. 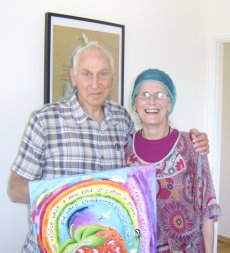 Voices & Visions artist Chana Helen Rosenberg met with Harold Grinspoon in Tel Aviv and presented him with the original painting for her Proudly Jewish poster. See the complete series on the Proudly Jewish landing page. 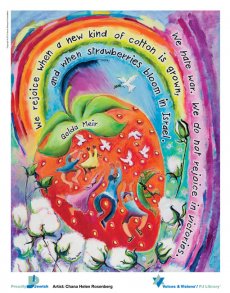 Voices & Visions launches Proudly Jewish, a six-poster set that "exemplifies the values and ideas that Judaism teaches."  Complimentary poster sets are available to Jewish organizations in the U.S. and Canada, and the posters, thinkers and artists are featured on the series landing page.

Join the converation at #ProudlyJewish.

See two video clips of discussions around posters - one before entering Jerusalem's Old City, the other before planting trees - on the Videos page. 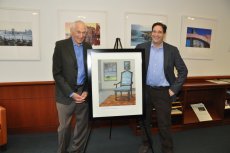 To honor Supreme Court Justice Benjamin Cardozo’s significant influence on the development of American common law in the 20th century, Harold Grinspoon, visionary of the Voices & Visions posters, presents an autographed Milton Glaser poster to Dean Diller at the Cardozo Law School in NYC.  The Cardozo quote on the poster reads: "The heroic hours of life do not announce their presence by drum and trumpet." 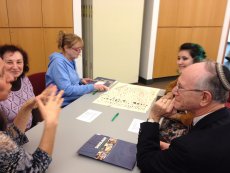 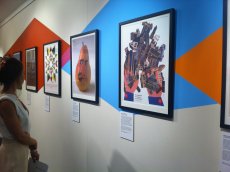 Exhibit of the Voices & Visions Masters Series at Jewish Museum of Australia in Melbourne, Australia

From the exhibit description:

"Drawing on concepts of environmental health, communal belonging, identity and positive existence, the exhibition encourages us to consider which Jewish ideas remain relevant and poignant in contemporary times.  Visitors can also make their own posters in the gallery workstation or participate in an online discussion of these great ideas." 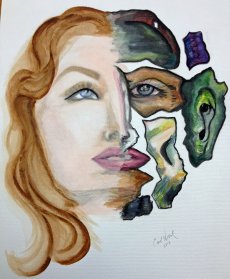 From the exhibit description: 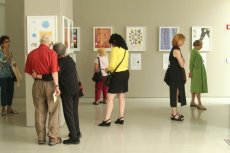 The exhibit aimed to "spark conversation on Jewish identity." Read a description of the exhibit on the Spertus website.

Read a featured article on the exhibit in Chicago's JUF News. 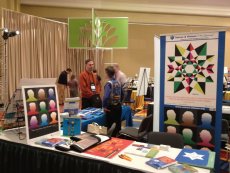 Presentation of Voices & Visions at the centennial conference of the United Synagogue of Conservative Judaism (USCJ), Baltimore, October 13-15, 2013 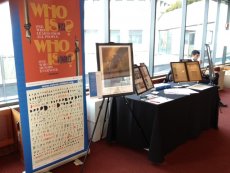 Presentation at the annual conference of the Council of American Jewish Museums, New York City, March 3-5, 2013

Voices & Visions sponsored a dessert reception at the Museum of Jewish Heritage and offered its new Masters Series notecards as a gift to all attendees. 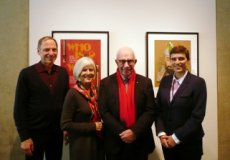 ROI Community, an initiative of the Schusterman Foundation, connects and supports young Jewish innovators from around the globe.

At the 2012 ROI Summit participants were invited to discuss ways they could bring Voices & Visions back to their organizations. 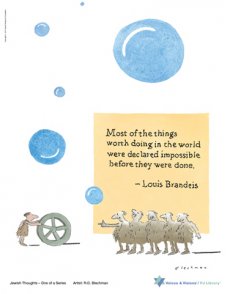 PJ Library, the flagship program of the Harold Grinspoon Foundation, has delivered 3 million Jewish-themed books to families with young children. 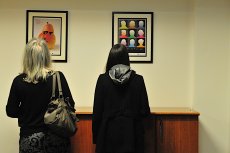 Debut exhibit of the Voices & Visions Masters Series at the opening of JHub, the centre of Jewish Social Action and Innovation in London, England

JHub, a new initiative of the Pears Foundation, supports social entrepreneurship and collaboration within the British Jewish community.